More ways for you to share your impeccable taste MY THOUGHTS ON THE PHOTOSHOP PLUG-IN

The Adobe Creative Cloud is integral to how I work. While I start all of my designs by hand through painting, sketching, or print making, I eventually scan them for digital manipulation which happens in Photoshop or Illustrator. I have had a chance to try out the Photoshop Plug-In: Adobe Textile Designer and thought I would share my thoughts.

First, the Textile Designer plug-in is still in a beta version. It’s not yet been perfected, so this is my opinion on a product that is still in development. I have been using it on and off for over a year now. You can try it out too, by going to ADOBE TEXTILE DESIGNER and downloading the Beta Version. Of course like most things Adobe, you to have an Adobe Creative Cloud subscription. 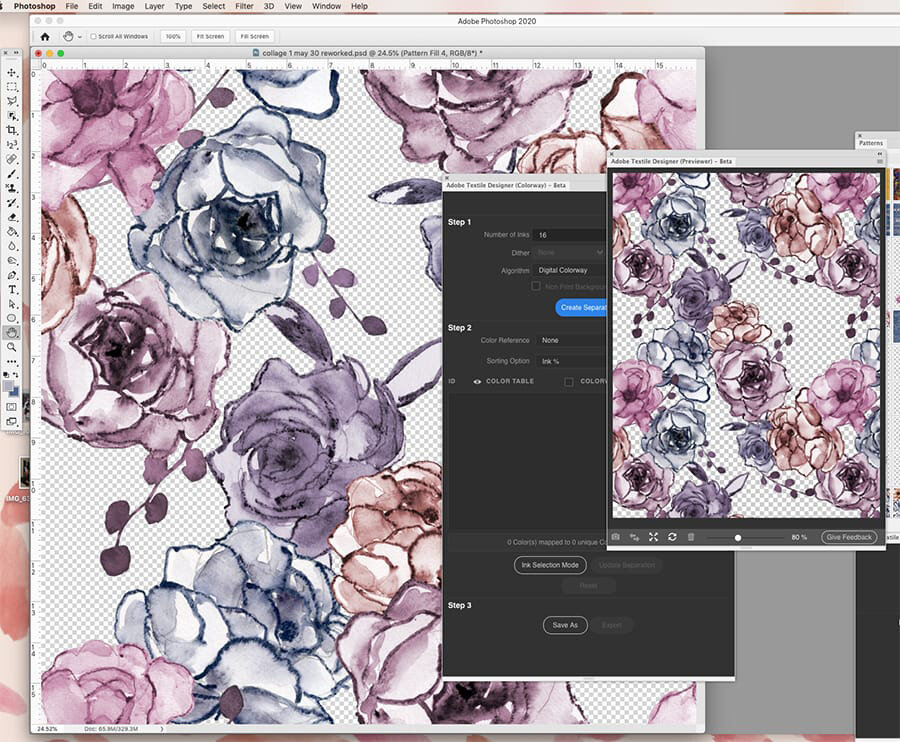 Having used Photoshop to design seamless repeats for many years, I was skeptical/ curious about a tool that could make this process easier. It’s part art and part technical, so what the Textile Designer Plug-In can do is help you with the technical part. Essentially, with the plug-in running you can choose which layers you want to wrap around to create your seamless repeat. There is another window that shows you how the pattern looks in repeat as soon as you place and wrap your motifs. Adobe has added color separation and production output tools to the plug-in as well.

Having used Photoshop to design seamless repeats for many years, I was skeptical/ curious about a tool that could make this process easier.

The biggest issue that I have with Adobe Textile Designer is the lag that it creates. Hopefully this will continue to be improved, but it’s hard to work and be productive when Photoshop has to pause and think before recalibrating itself with each step. The amount of slow-down is significant when you are creating production work. It makes it almost unusable. With complicated files I tend to abandon the plug-in and go back to my old methods.

The second issue is what it does to your files. I already have a prescribed way of organizing my files and I know just where to find things and how to get those files production ready. Adobe Textile Designer creates multiple layers within a motif that is wrapped. Technically I get the reason for this— they need to act as one motif but they are really multiple layers and each piece of the motif needs it’s own layer. I haven’t delved into adjusting these files for production yet. That will come in a future review.

With complicated files I tend to abandon the plug-in and go back to my old methods.

The third issue is a false sense of confidence. Just because you can make something into a repeat pattern does not make it a good one. I find the same true with Adobe Capture. Yes, you can capture things and make them into patterns, but 99% of the design world knows how you achieved your design in a single glance AND they know they could do it too. Keep that in mind when relying on technology to do all of the heavy lifting for you. Knowing how to create a balanced layout, understanding scale, color, and effects are important when creating beautiful surface pattern designs. Yes, learning how to make the technology work for you takes a long time. You have to practice through hours of frustration, but once you have command of Photoshop and Illustrator you will be able to create what you imagine, not just what happens when technology takes over.

If you don’t know Photoshop before you add in the Textile Designer Plug-in, I think you will be even more in the dark when it comes to further manipulating your work. The Textile Designer Plug-In adds a layer of complexity. It can be super helpful for complicated repeats and half drops—there is no doubt about the fact that it takes the headache out of these often mind-boggling repeats, but for the simple stuff it’s easier just to make it in Photoshop.

Right now I use it occasionally— usually if I’m stumped by a repeat or if I want to look at a design in various repeat styles quickly. Otherwise I stick to the standard. I have work-arounds for a lot of what the Textile Designer Plug-In accomplishes.

If you don’t know Photoshop before you add in the Textile Designer Plug-in, I think you will be even more in the dark when it comes to further manipulating your work.

I have heard rumors that when this product is released to the public it will be an additional charge on top of the CC subscription. Up to $30 a month more. At this point, given the current speed and functionality of this plug-in, I would pass. As a professional surface designer it does not offer the benefit I would need to justify the cost. Now, all of this may change as the Adobe team perfects the plug-in. I’ll wait to make my final judgement when I see the actual plug-in in action, not just the beta version.

Give it a try and let me know what you think!

Free domestic shipping on orders over $25

Gifts you will love to give Subscribers always get the scoop first, including shop restocks, giveways, & offers. Join us!